We allow ourselves to write a post here to introduce you to a game that we are currently working on and you might enjoy : Legends Of 7 Seas!

We are two developers on this project Mike (from France) and Tyler (from USA)!

We used to work together 7 years ago on a project about creating a mmorpg similar to what we used to play, but unfortunately, we didn’t have the right experience and knowledge to correctly make it… until 1 year ago !

Indeed, we secretly worked on each other independently until Tyler contacted Mike and decided to work on the same futur, perspective, vision, and finally achieved their dream : create an enjoyable, fun yet simple 2d adventure pirate game that everyone would love to play!

Weeks after weeks, line of code after line of code they finally got to an alpha test playable version of the game (and now heading for more).

So what is Legend Of Seven Seas ?

Legend of Seven Seas is a work in progress, indie, mobile and native massively multiplayer online game based on the fantastic universe of pirates, developed for multiplatforms (Windows, Mac, Linux, Android – and soon IOS & HTML5) by two passionate gamers (

You have to fight bosses, make a name for yourself, dominate the foes by joining or creating a guild hideout, the choice is yours to conquer the 7 seas!

As this game is inspired by old school / classic isometric mmorpg we added and plan to add a lot of more “modern” game play mechanisms to the game to make it way more sleek and enjoyable for everyone!

This game is clearly a mix between arcade, rpg and pvp, because the main idea is to have a game based on adventure and various pirate legends without going too much into overpowered and not so realistic fantasy, hence the name : Legends Of Seven Seas!

How will the game be available ?

The client of this game has been made in Java (of course!) and with the help of libgdx framework.

Legend of Seven Seas is developed for multiplatforms :

That means, everywhere you go, you can always play L7S with your friends!

What is the actual status of the project?

We are currently on open alpha stage, that means for now the game is entirely playable through our game launcher for native platforms (google play dev in progres!), you can register an account, and play on our official dedicated hosted server (on USA east coast actually).

There are a lot of primary features implemented yet be aware that this is an alpha state game so don’t expect a total bug free experience nor fully implemented features!

We plan to release an open beta version later this year after a lot of testing because we really wanted to make the game as smooth as possible!

How and where I can test the game and be updated ?

You can always find us on popular social media :

Actually, the game can be tested via native Launcher for Windows, Linux and MacOS, directly available from our official website! However we strongly recommend you to join our

Discord because it is our primary way to communicate even if all of our social media are kept up to date!

Some medias to tease you : 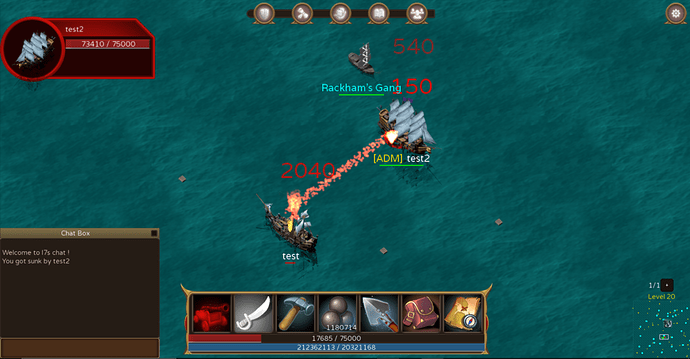 Hoping to see you soon on the high seas!