Hello guys recently make new game, and interested in your feedback, what you guys think? 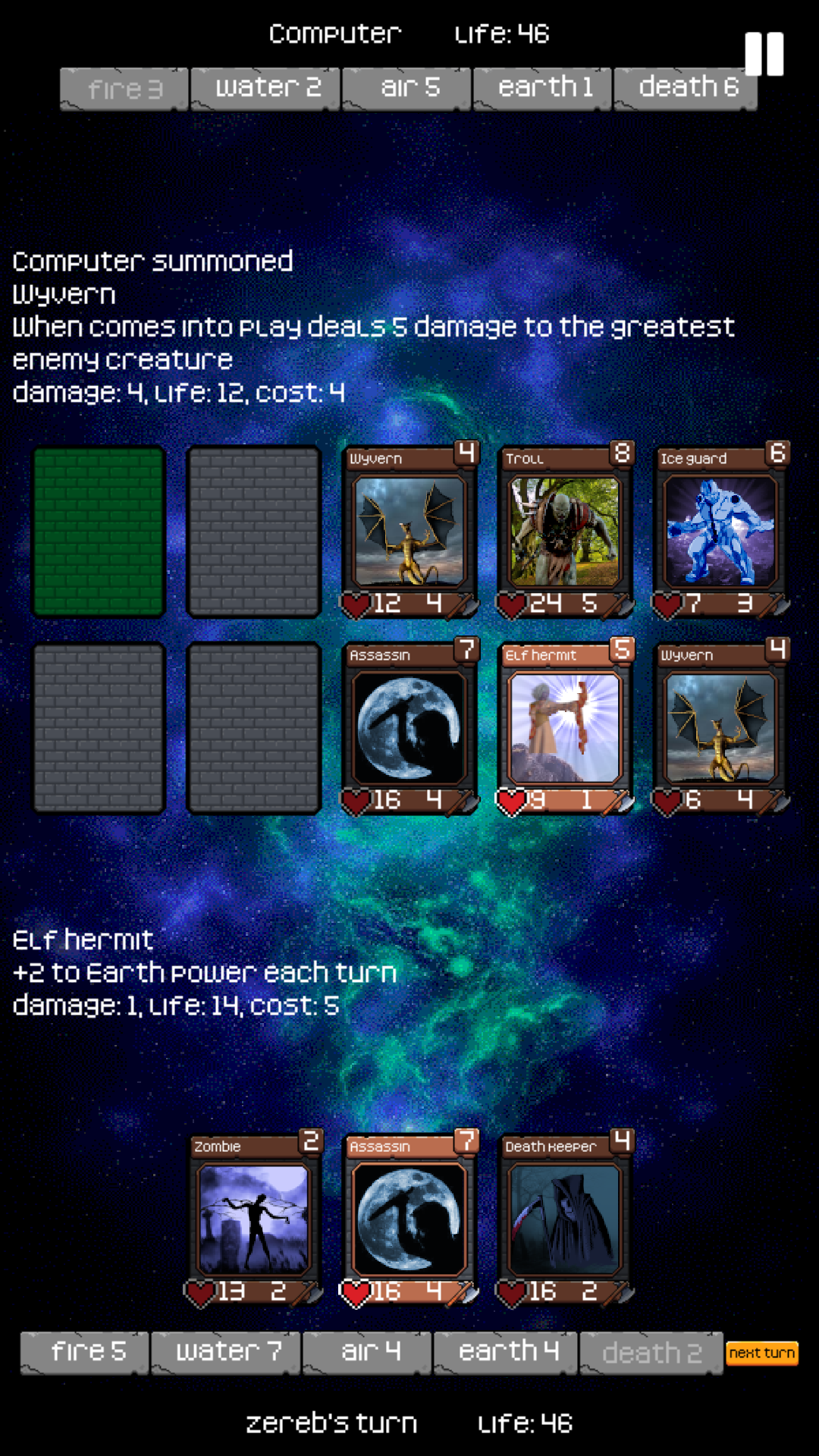 1080×1920
Astral Tournament card game where you fight other mages (computer or other players) for control of magical planes, by strategically using and casting creatures and magical spells.

Play multiplayer vs other people (currently LAN only)

The creatures and spells are of the following magical elements: Air, Fire, Water, Earth and Death. Each mage starts the duel with 50 life points. Each mage has five numbers - they represent his power or ability within the five magic elements. These abilities affect the spells and the strength of each spell the mage can cast. (e.g. if your Fire power is 5 you can cast spells or summon fire creatures equal to or less than the 5th level). Each time you cast a spell or summon a creature, your remaining strength is reduced by the cost of that spell or creature. However, each turn all of your powers are increased by 1.

The object of the duel is to defeat your opponent by reducing his life number from 50 to 0.

I don’t know much about playing these sorts of games, but the design and look is quite appealing, to me. I’m definitely feeling a desire to take a closer look. What sort of pixel density is practical for Android graphics?

Thank you, what do you mean by pixel density, i just pick resolution what i feel going to fit and scale to phone screen according to aspect ratio.

Pixels per inch was my intention. I’m not up to speed on issues regarding screen displays, images sizes and resolutions and may garble some of the terminology. I’m working on my first program that touches on these issues, with a browser-based program for displaying a friend’s comic book. I’m not familiar with the norms. When I increase the size of your images, I can see some limits to the resolution of the graphics, and am wondering if that is coming from the image resolution of the graphic you posted here or some trade-off accommodating Android. I think they look great for their resolution, though, and given the small size of Android screens, likely perfectly appropriate.

Its kinda is art style for my games, i am way more programmer than an artist, so with lower resolution i can get away with less details in graphics. If you interested in technology behind that: i use libGDX framework which has Viewports its uses opengl viewports to stretch scale fit etc image, so if i have 800 x 480 resolution int will be scaled to fit whatever phone screen, furthermore to keep aspect ratio i simply get aspect ratio from original phone resolution than scale one of the sides(width or height) of my desired resolution.
To read more about technology you can here

I’m having the comic book artist scan at 600 dpi. We will use this for PDFs to be sold as downloads. For the comic-book-viewer, I am reducing the resolution to 300 (using Image-Magick tool) and stretching/shrinking that to fit the 6 different viewers currently supported. Anyway, I don’t mean to hijack your thread. Again, very nice work, both in design and in the artwork itself!